In what seems to be one of the craziest ending to a soccer tournament in recent memory, Atlanta’s Rovers White defended its title of Champions of the Jack Frost Tournament. The tournament took place this over January 14 and 15. In the 2 day tournament, the Rovers White reached the finals and won in penalty kicks. The Rovers White is an over 30s team that is part of the Rovers Soccer Club of Atlanta Georgia. The club is the largest and most successful veterans clubs in Georgia. The teams have been winning in over 30, 40, 40, 50 and 60 years competitions including the 2011 Over 60 National Championship. Rovers White is led by player/coach Mike Kinion, member of the North Atlanta Soccer Association (NASA).

The tournament started for the Rovers with an 8am match against a stubborn Japanese team ANA in 25 degree weather. In a frozen pitch at Webb Bridge, the match ended in a 0-0 tie. The next match was against Thrusters, a team that had thrashed fellow club team Rover Green 6-0 earlier in the day. Rovers White prevailed 6-2. The third match was against Los Diablos on Sunday morning in a hotly contested match that had Rovers prevail 3-2.
The win propelled the Rovers to the Finals against a powerful Brazilian team, Cruzeiro, that had overwhelmed their opponents with 11 goals for and only 2 against. Rovers White opened the scoring with a nicely placed header by Pope High School coach Rich Groeneveld in the first 10 minutes. Five minutes later, goal keeper Ian Wheeler was handed a straight red card for handling the ball outside the box. Mark Stevens aka Markaroni stepped in to play keeper. Rovers had to play the rest of the game with 10 men. Soon thereafter, Cruzeiro equalized. To make matters worse for Rovers, their main playmaker Jorge Redmond pulled a hamstring and had to be replaced.

The game continued to a 1-1 stalemate with Markaroni being forced to make many fine saves. The overtime period continued with Cruzeiro desperately attacking. Rovers striker Weo Lopez was carted off in the early part of the overtime with severe leg cramps. It was looking like it was going to be heading in penalties when injured veteran striker and last year’s golden boot, QuiQue Lopez go up from the cold bench and informed skipper Mike Kinion that he would guarantee a victory if he would be put in at the last minute. Lopez was heard telling the crowd that there was “Something magical is about to happen. I will show you magic.” With 2 minutes left in the game, Kinion made the bold move of putting in Lopez. It was a bold move because Lopez had been injured for 2 months and had not played competitively. Two minutes later, the game ended and the teams headed to penalties.
This is where the crazy ending began. Kinion, Markaroni and Lopez met and hatched out a plan to psychologically turn the tables. It was decided that Markaroni would switch goal keeping duties with Lopez after the third kicker. Then, Lopez would take the final fifth kick. The aim was to shock the Brazilians. Team captain Franklin Young informed the referees of the plan and confirmed its legality.
The penalties began with the Bralizians going up 2-1 with the Rovers missing 2 out of three PKs. After the Rovers missing the third PK, Cruzeiro striker Paolo Rochi and skipper Fernando Chaltein began consoling the Rovers and congratulating them for a good effort in the tournament. At that time, Lopez informed them that they would be switching goalies after the third penalty and that the Rovers would win it in the fifth. The confident Brazilians laughed and returned to their team.
When the third Brazilian stepped up to take the kick, Markaroni made a spectacular save. The score was still 2-1 after a Mesac Celeste conversion. The fourth penalty was taken by Captain Franklin Young in a perfectly placed spotkick to the right of the goalie. The score was now tied 2-2.
The Brazilians were expecting to see Markaroni back in goal after his fine save. This is where the plan began. The Cruzeiro team began to jeer when the referee indicated to Lopez to begin to put on the goalie shirt and gloves as requested. The Cruzeiro players, at first, did not understand but when Lopez reminded Rochi and Chaltein of the earlier conversation with a smile and a nod, they understood. The fourth Cruzeiro kicker was very eager to take the kick but had to wait for the goalie and referees to be ready to commence the kicks. The kick hit the post to the left.
The score was still 2-2. It was now the fifth and final kick for the Rovers. Lopez stepped up, glanced to the left and calmly placed the ball low, right corner. Rovers were now up 3-2 with the final Cruzeiro kick left. Lopez retrieved the ball out of the net and handed it over to the Cruzerio player while maintaining eye contact with the kicker. Lopez returned to the goal and waited for the referee to blow his whistle. As soon as the referee blew his whistle, Lopez pointed to the Cruzeiro squad and deflected a powerful kick into the crossbar. Game over, Rovers won the 2012 Jack Frost Tournament.
The Rovers supporters rushed the field as the team celebrated along with a large crowd of on-lookers and other teams. This was the crazy ending to the 2012 Jack Frost Tournament in Alpharetta Georgia.
“When asked about the ending, Captain Frankin Young explained, “Every credit should be given to Mike Kinion for his ability to get us in a position to win. His skills in strategy and man management were the deciding factors. After a disappointing draw in the first game, he was able to make the adjustments needed to get up the victory.”
The Annual Jack Frost Soccer Fest is organized and sponsored by Atlanta Metro Soccer League. The tournament is in support of THE SENTINELS of FREEDOM, Duluth Chapter, Duluth, GA
Sentinels Of Freedom provides four year “life scholarships” to help vets become self- sufficient. Vets are finding that once they’re released from the hospital, they face the everyday hardships of finding a home, continuing their education, or going to work to support their families. The Sentinels are there to help. 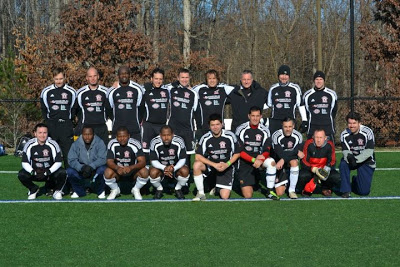